As the pioneer settlement of the first farmers in the Oxnard Plain, the Oxnard Historic Farm Park is home to the two oldest buildings (the 1872 Farmhouse and the 1876 Winery) built by Gottfried Maulhardt , a towering 1800s Canary Island Date Palm, an 1890s Carriage House, an 1870s spring wagon that once belonged to Johannes Borchard, two vineyards of 1880s Zinfandel Blanc grapes of cuttings from Santa Cruz Island, two 1903 lima bean threshers built by the Ventura Implement Company, 8 vintage tractors, plows and other farm implements, a lemon orchard, an avocado grove, and five historically representative gardens…oh, and that doesn’t even account for our numerous exhibitions of historic photos and farm implements that show the evolution of farming in the Oxnard Plain over the past three centuries!

The seeds for the Farm Park began back in 1997 after Jeffrey Maulhardt traveled to the Duderstatdt in the Lower Saxony area to do some research on the early German settler families who migrated to Ventura County in the later 1800s. The families he sought to find information on included the Borchards, Diedrichs, Friedrichs, Kohler, Maulhardt, Reimann and Wucherpfennig. After two weeks of gathering information about the families farming and craftsman histories dating back several centuries, he developed a deeper appreciation for preserving history. Many of the farmsteads and churchs were built in the 1700 and 1800s and still housed relatives and provided a place of worship. The villages of Desingerde, Esplingerode, Mingerode, Nesselroden and Werxhausen still included families that migrated to the Oxnard area.

At the Maulhardt farmstead in Mingerode, Jeffrey learned that the Maulhardt family included generations of zimmermeiter or building masters and maurer, bricklayers. All the buildings were made out of brick. Included among the brick buildings was a storehouse building, similar to the brick winery building at the Bob Pfeiler ranch off Rose Ave in Oxnard. Knowing that the property was originally farmed by Gottfried Maulhardt, Jeffrey began discussing with Bob Pfeiler about preserving the original buildings that Gottfried built sometime in the 1870s. Jeffrey gathered friends Gary Blum and Eric Daily and began putting together a plan that would create a historic site. Within the next few years paperwork began for historic preservation of the buildings.

However, by 2001, Bob’s health deteriorated and he passed away the following year. With his 47 acres ranch now up for sale, a new approach was needed to go forward. Out of respect to Bob’s five children, the historical paperwork was withdrawn. Through planning commission Maury Navarro’s connection, Jeffrey next approached the developer, John Laing homes. The idea was to carve out an acre of land that would be a part of the 3 acres the developer had to give back to the city, which allowed the Pfeiler family to get the full value of their land and not delay the development of the property. The Developer would benefit by not having to face the backlash of destroying the historic buildings and the community would gain a historical asset. Jeffrey, Gary and Eric formed a nonprofit in 2003 as the Oxnard Historic Farm Park Foundation and at this point requested county landmark status and were granted designation as the Gottfried Maulhardt/Albert Pfeiler Farm Site – Ventura County Historical Landmark 165. The following year, in 2004, the Farm Park began selling $100 engraved bricks to raise money for the foundation. It wasn’t until the residential houses were finished in 2007 before the Foundation could officially occupy the property and begin hosting events to raise money.

With no plumbing, electricity or water, the first events were break even at best, but support and momentum slowing began building. Early sponsors included Chuck Covarrubias, Jim Gill and Frank Naumann. With their generous donations along with brick sales and other sponsorships, the Farm Park added utilities, restrooms and an office space by 2013.

Juan Camarillo, a member of the Hijar (1834) expedition that included another longtime county pioneer, Jose Maria Covarrubias, acquired the land from Rafael Gonzalez in 1865.

In 1867, German immigrants Gottfried Maulhardt, Jacob Maulhardt and Caspar Borchard arrived with their families in California. They met up with Christian Borchard, who arrived in California during the Gold Rush era. After floods destroyed his land in San Joaquin Valley in 1866, Christian Borchard traveled south to Santa Barbara County, soon to be divided into two counties including Ventura County in 1873. Here he purchased 1,000 acres from Jose Lobero. Gottfried and Caspar leased land on the Colonia Rancho from Juan Camarillo. Christian, along with his son, John Edward “Ed” Borchard, Caspar & Gottfried planted the first commercial crop, barley, on what became the Oxnard Plain.

Gottfried Maulhardt acquired 410-acres as his portion of a joint purchase of 1,230.31-acres by Johannes Borchard, Jacob Maulhardt, and himself from Juan Camarillo on December 26, 1872. Being of Catholic faith, the Maulhardts and Borchards became acquainted with Camarillo at the Ventura Mission.

Also, by 1872, Gottfried Maulhardt, who was trained as a master craftsman/brick mason in Germany, began constructing his home. Soon after and by 1876, Gottfried built a two-story brick winery/storehouse building with a small living space on top. For bottom basement section he stored the wine for the Santa Clara Chapel that was completed in 1877. An 1879 Ventura Signal article pointed out that Gottfried grew “A small vineyard 250 grapevines of the choicest varieties.” By 1875 Gottfried Maulhardt sold 205 acres to Caspar Borchard. In 1887, Hiram K. Snow purchased 171-acres from Gottfried for $17,141—though Gottfried did retain a 16-foot wide road leading to the old Conejo Road (now the 1010 Freeway) that led t0 the Santa Clara Parish Chapel.

Sophie Maulhardt continued to own the land upon her husband Gottfried’s passing in December 1898 and kept it until she sold it in 1905.

With the death of Bob Pfeiler, the Pfeiler family sold the 46-acre ranch to John Laing Homes for development.

Previously, Jeffrey Maulhardt, had discussed with Bob Pfeiler about preserving the Maulhardt Winery and the farmhouse. However, with Bob’s passing, Jeff put the landmark status on hold and which allowed the family to sell the land without the impediment of a historical landmark interfering with the sell. By approaching the developer, Jeff offered to create a win-win situation for the family, developer and the community. He formed the Oxnard Historic Farm Park Foundation in 2003 to develop the site surrounding the old buildings. The 0.86-acres was donated to the City of Oxnard and the city leased the land back to the Foundation in 2007.

On January 6th, 2022, the Oxnard Historic Farm Park Foundation purchased the site from the City of Oxnard.

Since 2016, we’ve had the Master Gardeners of Ventura county joining us every Tuesday from 9:00-12:00. They also offer gardening classes throughout the year. 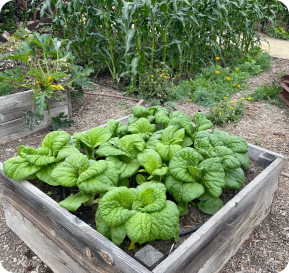 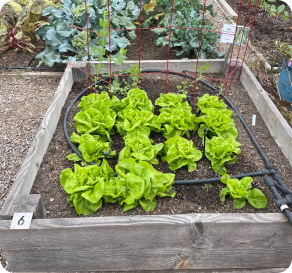 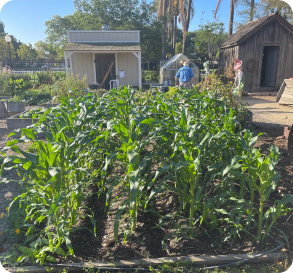 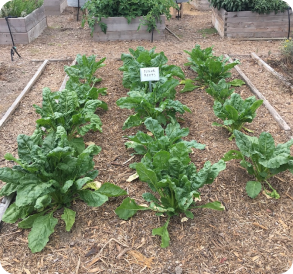